To start market making you need to:

Install the bot program on a server

You must have a virtual machine or server running Ubuntu 18/20 64-bit. If you haven’t, then go to any VPS service, for example, Digital Ocean, Ramnode, Scaleway, Hetzner.

If your machine has more than 40 GB of disk, 1 GB of memory, then we recommend to install the ADAMANT node on it. This is done in one command—by running the script install_node.sh on the command line. The bot will work more reliably with the node installed.

For the bot to work on the machine, you need to install MongoDB. Follow these instructions as root user.

It is better to install the bot under a separate user, in this example, the user adamant. If you’ve installed the ADAMANT node, then the user adamant is already in the system, and if not—follow step 5 of the same node installation instruction.

Also you need to install Node.js for the user adamant. If you’ve installed an ADAMANT node, then Node.js already exists, if not, follow step 6 of the same node installation instruction.

Now you can install the bot program.

Go to the directory with the bot:

The bot accepts commands in the ADAMANT blockchain Messenger. The dialogue with the bot is encrypted and protected from intrusion.

On your local computer or smartphone, create two messenger accounts, one for the bot and one for yourself. Account creation takes less than a minute: https://msg.adamant.im (Clear-web) or http://adamantmsg72ixni.onion (Tor application). Get free tokens for both accounts. Take a look at How to start with a blockchain messenger.

As a result, you will have two ADM addresses and two passphrases for them, for example:

The bot will use the first account, and you will send commands to the bot from the second. Therefore, open the messenger and log into Account-2, start a chat with your bot and give it a name. You do not need to open an application for Account-1. 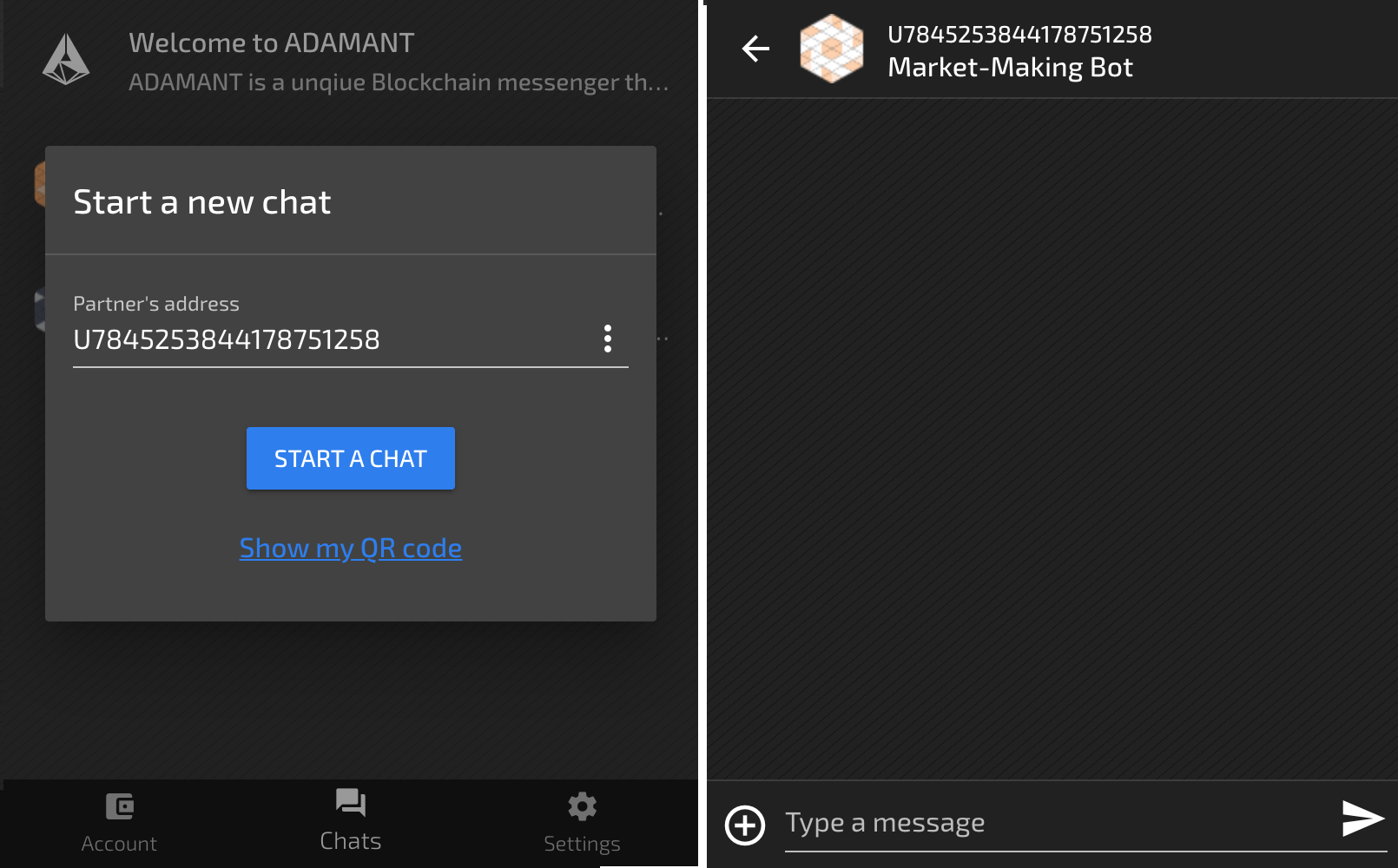 Each message from you to the bot and from the bot to you costs 0.001 ADM. Free tokens are enough for the first time, then get more tokens by participating in bounty campaigns https://adamant.im/bounty/ or buy a few—50 ADM per account is enough for a year.

Get API keys for the Exchange

The bot works with the exchange API to get information about current orders and place new ones.

To get API keys, log into your exchange account and create keys in the API section. For example, on the Resfinex exchange, this is the https://trade.resfinex.com/account/apikey. You will receive apikey and apisecret. Some exchanges, like Bit-Z, also require a trading password tradepassword.

Top up the balances on the exchange for the trading pair on which you will make market-making. For example, for the COIN1/USDT pair, you need to deposit the COIN1 and USDT. Don't deposit a lot of money at once until you learn how to operate the bot.

Go back to the server. Enter the directory with the bot:

Initially, the config file contains default parameters. They need to be changed.

admin_accounts Accounts from which the bot will accept commands. There may be several of them, but you will specify only one (Account-2):

exchange and pair Specify on which exchange and on which trading pair the market-making bot will work. Example:

coin1Decimals and coin2Decimals Enter the number of decimal places for this trading pair for both currencies. Check it out on the exchange. For example,

adamant_notify or slack Although not required, we recommend that you provide an ADAMANT or Slack address for notifications. For notifications in ADAMANT it is better to create a third account.

Do not change other parameters—you can do it later. Press F2, y, Enter to save changes in nano.

We recommend using the pm2 process manager to run the bot. If you have installed the ADAMANT node on the server, then pm2 already exists, if not, pm2 can be installed with the command npm install -g pm2 under the user adamant.

Now you can launch the trading bot (under the user adamant):

Look at the bot logs with the command:

Check if your bot is working correctly—write /helpto it. Write /balances and the bot will tell your balances on the exchange. If the bot does not respond, then you did something wrong. See logs.

To make the bot work even after restarting the machine, add it to cron:

In the editor, add a line to the end:

Before starting market making, go to the exchange website and manually fill in the order book for your COIN1/USDT trading pair. We recommend at least 10 orders for both buy and sell. It is better to fill in order books from another account, and not from the one that the bot uses by API.

The bot will work as you tell it. Check out the list of commands.

Trading volumes on the exchange—are executed buy and sell orders per day. To create volume, the bot trades with itself. It can trade “in spread” so as not to drain your assets, and it can buy from “order books”—then the trades will look very realistic.

View your balances on the exchange with the /balances command.

Set the number of tokens in a single order with the /amount command. For example:

Then set the frequency of placing orders:

The bot will trade once every 3-250 seconds.

Daily volume depends on both amount and interval. You will determine these values ​​empirically.

Open the exchange website and see how the bot is trading. If there is no bidding, see the logs.

Dynamic order book filling is enabled by default. This can be changed using the /enable ob and /disable ob commands.

Watch for notifications that the bot sends you. For example, if there are not enough balances for market making, the bot will notify you.